HISTORY OF THE ORCAS ISLAND COMMUNITY BAND
The Orcas Island Community Band (OICB) is a 501c3 non profit all-volunteer organization comprised of approximately forty Orcas Island and occasionally neighboring-island men and women dedicated to making a unique musical and cultural contribution to our community. Membership in the OICB is open to musicians of high school age or older who play instruments found in the standard scoring of the concert band. Our members come from a broad variety of backgrounds, including healthcare workers, firefighters, school teachers, engineers, politicians, doctors, housewives, students, and senior citizens.
Founded in October 1990 in response to local musicians desire to play band music together, OICB began as a “garage band”.   Five or six musicians gathered in Marlin Brown’s garage in the Orcas Highlands/Eastsound for weekly music sessions.   By 1994, the group had grown to ten musicians and they performed occasionally in the Historical Society’s July parades and were jokingly called the Orcas Island Hysterical Society’s Sedentary Band.   After participating center stage in one of the Orcas Center’s early variety shows membership grew exponentially.

Throughout our history, the Orcas Island Community Band has striven to promote high- quality performance of traditional and contemporary band literature. The impact of our outreach program has been noted time and again as music lovers, especially students, have seen that their love of music can last a lifetime and our wonderful community embraces us.  The Orcas Island Community Band is regarded as a friendly, social band dedicated to having fun and making music. 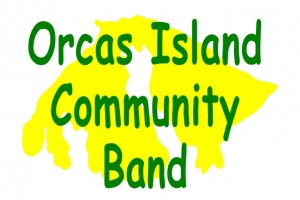